5. Skratch, Puma and the Cats' Dinner 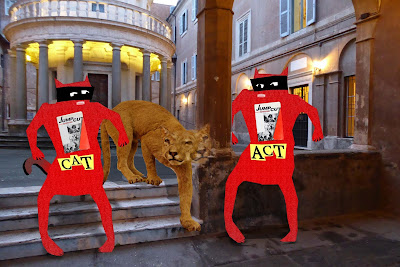 Puma growled when he heard the story. "I don't like the sound of this time duplication business, er ... Skratch." He looked from side to side. "Which one of you is which?" I'm Skratch," said Skratch." "We both are," said the other Skratch. Puma scowled. "I've read about this in books." "What kind of books?" asked the Skratches, both at the same time. "Hard back theoretical books with equations," replied Puma. His growl was suspicious and he continued at length. "I am a materialist Puma. Strictly speaking, you are both theoretical and don't exist." Skratch purred long and loud. "My theoretical stomach is quite hungry." "So is mine," said the other Skratch. Puma frowned. The Commander Wabsworths say there's plenty of fish at our destination." "Fried?" asked Skratch. "Grilled?" asked the other Skratch. Puma was getting the hang of things. "Look here, fellow felines. Terni the Dragon is on his way to pick us all up. He won't be long." The stomachs of both Skratches groaned in unison. "In the interim," said Puma, "there's a trattoria round the corner, famous for seafood risotto." "Who's paying?" asked both Skratches anxiously. Puma roared so loudly that windows rattled. "No need for cash, you're with me. You can have what you like." "Are you going to frighten the waiters?" asked the Skratches, "Certainly not," said Puma, "I have meal vouchers."
at December 29, 2016