7. The Wabbit and the Quick Fix 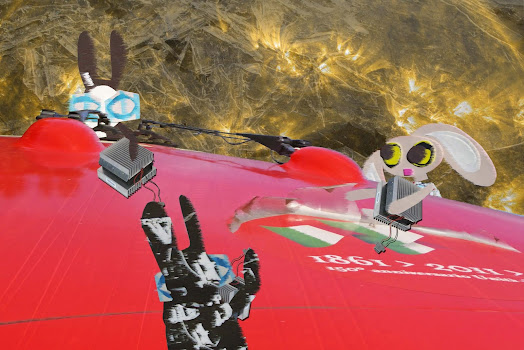 The Wabbit slid his heater into place. Lapinette and Wabsworth did likewise with theirs and the ice began to melt - but it was slow. Quantum seemed to be in the grip of what Lapinette called a space bubble. She reckoned it was something to do with Wabbit's new lattice drive but thought better of mentioning it. "This appears to be a by product of my Lattice Drive," muttered the Wabbit. "Good thinking," smiled Lapinette. "We're in a lateral bubble," announced the Wabbit. "Good thing you went to that night class," said Lapinette. The Wabbit's night class had proved most instructive in tampering with the laws of physics. But although it had taken the Wabbit a long way on theory, it lagged considerably on practice. This he was forced to develop on his own. "One rabbit in a shed can only do so much," sighed the Wabbit.  He thought it over. "I think we're surrounded by an oasis in the space-time continuum. We're in a mirage." Lapinette's paw drew an icy diagram on the metalwork. "A spinfoam oasis? A little short of palm trees for my liking." They shook as Quantum's lattice drive juddered into life. A shard of ice fell across Quantum's nose and dribbled moisture along his paintwork. Wabsworth waved a soggy paw. "I'm convinced our predicament is caused by the Fifth Force, Commander." "At least the heaters are working," grinned the Wabbit.
at December 05, 2016