3. The Wabbit and the Christmas Five 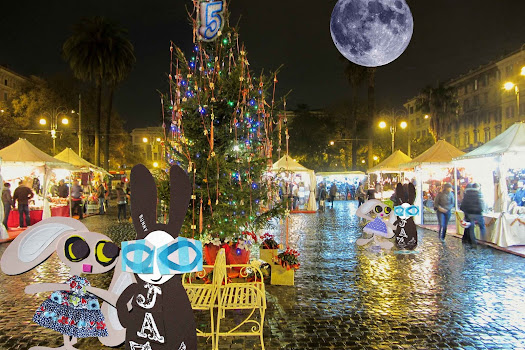 Confident that the Wabsworths had set preparations in full vigour, the Wabbit and Lapinette hopped through the Christmas market. To ensure no suspicions were aroused, their opposites followed at a discreet distance. "No word of the Fifth Force?" asked Lapinette. The Wabbit smiled. "A bunch of Fives were spotted near Piazza Navona, but they were only drunken soccer hooligans." "What about the Agents of Rabit?" said Lapinette. The Wabbit vaguely shook his head. "Not a dicky bird."  Lapinette grinned. "Who's Dicky Bird?" It was the Wabbit's turn to laugh. "That's my nickname for our agent, Major Spitlove." They strolled rather than hopped and lingered at the market stalls, looking at trinkets and trying on hats. "I've seen better stuff," said the Wabbit, "Same every year," said Lapinette. "You say that every year," smiled the Wabbit. Lapinette's ears suddenly twitched and swivelled. "Did you hear a five?" The Wabbit was about to say that was synesthesia, but thought better of it when he felt a five staring at his back. He turned but saw nothing. "I really don't know what I'm looking for. What does the Fifth Force look like?" Lapinette had attended a weekend school on categorical quantum mechanics in Trieste. "If we could see it, it might look like a bunch of dark photons," she nodded. "Well I think it should lighten up," said the Wabbit.
[Bunch of fives: A fist used in a fight.    Not a dicky bird (Cockney rhyming slang.):  Not a word]
at December 24, 2016