8. The Wabbit and the Big Roll 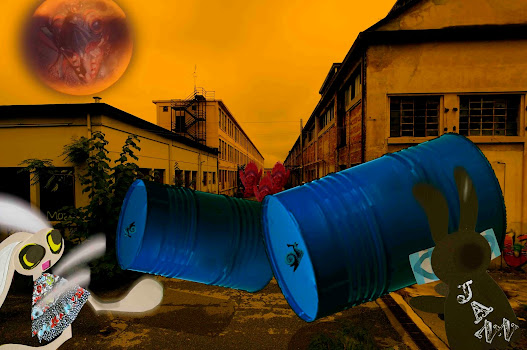 Hotly pursued by Lapinette and the Wabbit, the canisters sped towards a deserted industrial zone. Blood Collectors gathered under a sinister moon and they were right in the way. "I can't stop the cans," cried Lapinette. The Wabbit would have shrugged but he was too busy keeping pace. "Let's give them some help," he yelled. Lapinette launched a powerful left foot at the nearest canister and struck it a mighty blow, The Wabbit knew the power of that foot. So he swung his paws three times and whacked the other canister dead centre. "Here's the blood we promised!" Lapinette put her paws to her lips and let out a blood curdling warble. A piercing whistle from the Wabbit split the air in two. As the canisters picked up extra speed, they bounced and slewed in an unpredictable fashion. Some Blood Collectors slithered to the side, But the cans crushed others like raspberry pies and left a trail of lumpy blood along the concrete. Lapinette wrinkled her nose. The stench was appalling and vapour spattered everywhere like bloody smog. The canisters crashed to a halt. Blood Collectors fell on them with abandon but the containers vibrated with staccato rattling and began to bulge. "They're gonna blow!" shouted the Wabbit. "I'm out of here!" yelled Lapinette. Now the noise was like two competing drum rolls and the canisters were twice their original size. As Lapinette and the Wabbit loped away they glanced up at a pale moon. "Can you see a face?" shouted Lapinette. The Wabbit's 28 teeth gleamed as two explosions lit the sickly night. "Everyone can!"
at December 31, 2015