6. The Wabbit and Borrowed Wheels 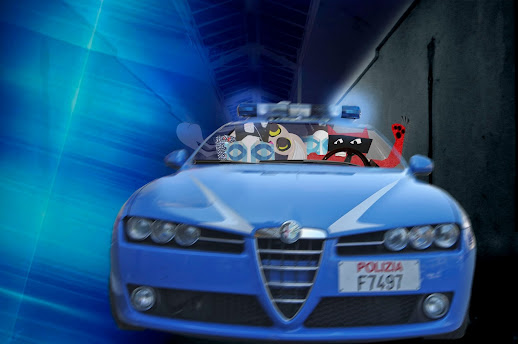 Lapinette and the Wabbit were swept along in a cloud of blue light and burning rubber. Skratch hurtled down an alley way and he didn't intend to stop. "Wheels!" gasped the Wabbit. "Ferrari based engine, 600 HP," purred Skratch. "How?" asked Lapinette. "We borrowed it," shrugged Wabsworth. Tyres squealed as Skratch swerved into the street and headed across the city. "Go go go!" yelled Wabsworth. Skratch switched off the sirens but not the lightbar. Now the Wabbit could hear other sirens wail - but they were fading fast.  He quietly wondered how many lunches this would cost him. Lapinette dragged her legs through the window and sat up. "Take a left, then a right." Skratch had a choice of throttles. The Alfa stood on its rear wheels and pounced into the night. Signals meant nothing to Skratch and a variety of street furniture suffered. The Wabbit glanced out the rear window and watched trash cans dance across the street. Lapinette continued to give directions. The Wabbit had no clue where they were going but he said it anyway. "This is an unusual route." "No police," responded Lapinette. "Gangs" asked the Wabbit. "Tonight," said Lapinette, "the police is another gang." "Quite a big gang," hissed Wabsworth. His eyes were trained on a spot a long way off. "Is that the place?" Lapinette nodded. "Then we have more company," grimaced Wabsworth.
at December 01, 2015