9. The Wabbit and the Quantum Flyer 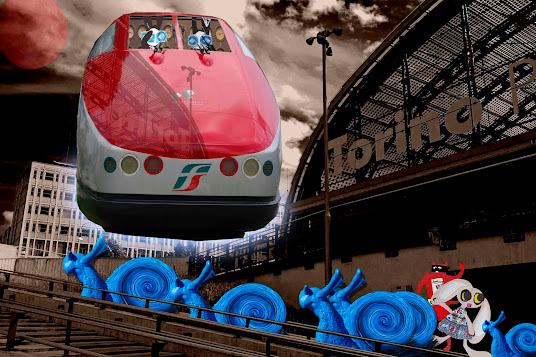 Quantum the Train met the team half way. "On the footplate. Now Commander!" bellowed Quantum. Quantum held some impossibly high rank at the Department - so the Wabbit and Wabsworth hopped quickly. Lapinette and Skratch herded blue snails on board. But Mo and To felt too punk to easily comply. To looked up and drawled. "I wanna be a choo choo driver!" "Choose that train!" yelled Mo. Now the heat was so intense that eggs could have fried on the station concourse. Lapinette's voice was urgent. "Shut the slither, snails! No time for jokes." "This train is bound for glory, this train," sang Mo and he shot forward. Soon they were all on board and Quantum's engines powered up with a menacing roar. "Quantum, what the binkie is happening?" asked the Wabbit, "It's the moon, maybe?" "Not exactly," said Quantum. Wabsworth pulled a lever and the engine shook into slipstream drive. The Wabbit heard what sounded like a Quantum chuckle. "Red moon hits your eye, like a big pizza pie." "That ain't amore," sang the snails who were berthed in the dining car. "The moon is being used in a ghastly experiment," said Quantum. "Agents of Rabit?" asked Wabsworth. "An acronymic organisation like LUNAR?" suggested the Wabbit. "No one knows," said Quantum. Suddenly Lapinette's light hearted voice crackled from Wabsworth's walkie talkie. "The Nocturnal High Garrison of  Tribulation. NiGHT." The Wabbit was about to smile but another voice cut into Lapinette's transmission. "This is the voice of NiGHT. We can hear you, earth rabbits ..."
at December 07, 2015