2. The Wabbit and the Steady Drip 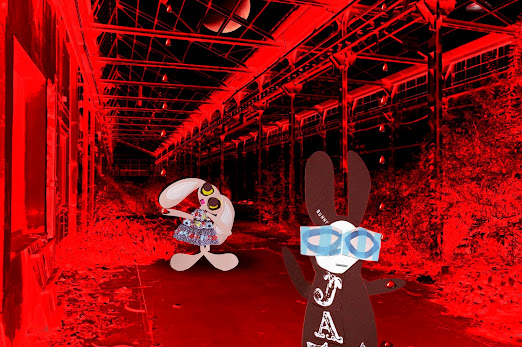 They travelled inland - but everything they found was either ruined or abandoned or both. The Wabbit looked through the shattered roof of a warehouse. "That moon changed." Lapinette stared long and hard. "It can't be the same moon, unless the one we're on is spinning fast." Something dropped close to the Wabbit's ear. It landed with a splat followed by another, then another. The Wabbit stretched out a paw. This time there was no splat - more of a squelch. It was merely an interruption in the steady drip from the girders. Lapinette held out a paw and heard another squelch. She looked closely as a crimson stain spread across her fur. "More blood," said the Wabbit. His 28 teeth flashed in whatever light there was. Beyond the girders was pitch black and the more they stared, the blacker it seemed. "I can't see where it's coming from," murmured the Wabbit. "Or what," added Lapinette. The Wabbit gulped. "It's like the building is bleeding." Lapinette smiled a wan smile. "Buildings don't generally bleed." The Wabbit's teeth flashed again. "This one does." The blood made pools on what was left of the concrete floor. Then it spread and thickened. The Wabbit sniffed it. "Same smell as the sea." "Shhh," hushed Lapinette, "I can hear something." They listened. "A craft is coming out of slipstream drive," grinned the Wabbit. Lapinette smiled and frowned at the same instant. "I don't think it's safe for Quantum to land. We don't know what we're up against." The Wabbit thought quickly. "Let's get into the open, where the team can see us." Lapinette wiped her fur clean and hopped forward. "Something's out for blood." The Wabbit did the same. "Let's make sure it's not ours."
at December 17, 2015