7. The Wabbit and the Runaway Barrel 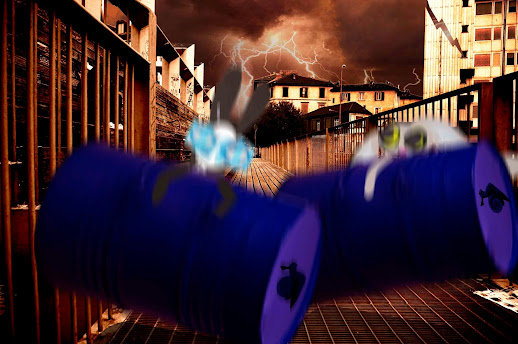 Lightning lit a red sky and cracked buildings. But there was no thunder. All they could hear was rumbling and a strange sound from inside the cylinders. The Wabbit and Lapinette rolled the containers back to the team to tempt the Blood Collectors. But the sound from inside got louder and louder and the containers started to twitch,  "I can't hold it," yelled the Wabbit. "Neither can I," shouted Lapinette. The Wabbit's paws slithered on the metal surface and his feet left the ground. Lapinette was stuck to her container and span with it as it rolled.  In the distance he could hear Wabsworth and Skratch screaming, "Let go, let go!" But he couldn't. The cylinders rolled faster and the Wabbit and Lapinette rolled with them. Lapinette winced every time she scraped the metal floor of the bridge. The Wabbit screamed blue murder as if he was dying, "I'm losing all my fur," he yelled. Lapinette knew the Wabbit was inclined to exaggerate, but her frock was torn and would have to go to the cleaners. Just for a second the Wabbit's container veered to the side and slowed. The Wabbit sighed with relief, Then it shot forward with enormous speed and Lapinette's container followed suit. The containers were no longer spinning but gliding as if they knew where they were going. They both felt the grip loosen and made plans to jump. The Wabbit pulled his tummy in. "Just roll!" he shouted. Lapinette was already tumbling through the air so the Wabbit launched himself backwards. He hit the ground with his head and bent his ears to the side. But suddenly he was on his feet, running and bellowing, "Follow these cans!"
at December 29, 2015