The Wabbits stop for Refreshments 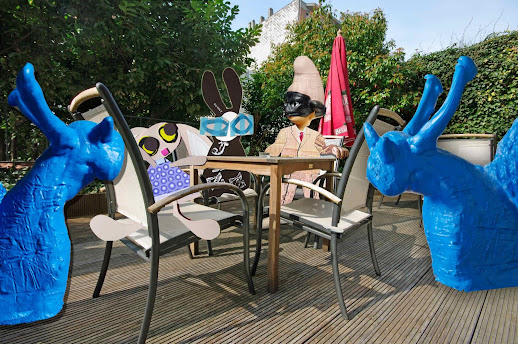 Instead of materialising at home, the gang found themselves sitting in a hotel garden. The Wabbit looked at the Moto Snails with a gleam in his eye. "While you were carousing around, bringing down governments, we were looking for a suitable hostelry," said Mo. "We got a special price," said To. "We beat 'em down," said Mo. "Then aperitivi all round," smiled Lapinette. "I'll drink to that!" said Pio the Puppet. "You don't have to have a carrot aperitivo, Pio," said Lapinette, "what would you like?" "I'll have ..." said Pio, thinking furiously, "a Tomfooleries' 007" "What's that?" asked Lapinette. "I know," said the Wabbit. Everyone turned to look at him curiously. "Rum, orange juice and a splash of Sprite," he smiled. Everyone stared at the Wabbit, waiting for more information. "Named for a song by Desmond Dekker," said the Wabbit. No one flinched or said a word. "The rudeboys go wail, cause them out of jail," explained the Wabbit. "Them a loot, them a shoot, them a wail," he continued. This met with absolute silence. "Them on probation now," said the Wabbit finally. Everyone sighed a long sigh. "Serve 'em right," said Lapinette. Mo giggled. The Wabbit wished he'd kept his mouth shut and tried to hide his embarrassment with a question. "Pio, what kind of adventure would you say that was?" he asked, as he usually did. "Espionage thriller," said Pio. "Wabbit Spooks," said To. "I'd like to bring down a government," said Mo. "How would you replace it?" said To cautiously. "No government," shrugged Mo. Pio laughed and cracked his knuckles. "There's no government like No Government!" he grinned. And they all laughed and laughed and laughed.
at April 13, 2012