7. The Wabbits round 'em Up 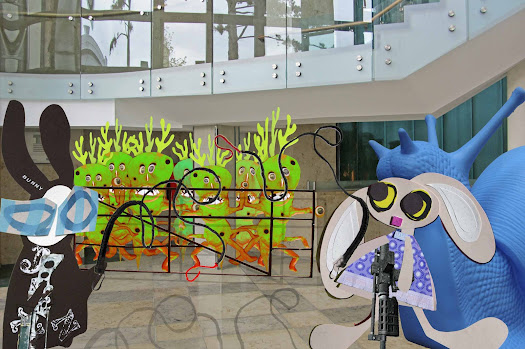 The Wabbit and Lovely Lapinette herded the greened Skarrots safely into an enclosure and breathed a sigh of relief. "No more GM monster Skarrots," said the Wabbit. "Carrots are now safely nutritious for all," said Snail, who liked a well-cultivated carrot or two. "How shall we proceed?" asked Lapinette. "No recent orders," said the Wabbit, "so there’s only one thing to do." "What’s that?" asked Snail. The Wabbit swung his whip twice. It snapped and cracked in the air and the Skarrots cringed back. "Move them, move them, move them," he sang. "Though we disapprove them," trilled Lapinette in reply. "Keep them Skarrots movin', Rawhide!" bellowed the Wabbit. "Don’t try to comprehend them, just dice and chop and bend 'em," sang Snail, "soon we will herd them out of sight,"  "Move 'em out, head 'em up, head 'em up, move 'em on. Move 'em out, head 'em up: Rawhide!" sang the Wabbit. "Cut 'em up, ride 'em in. Ride 'em in, cut 'em up. Cut 'em down, ride 'em in: Rawhide!" sang Lapinette. "Rollin’ rollin’ rollin', strollin' strollin' strollin', " hummed Snail. Lapinette cracked her whip several times then dropped her voice to become more melodic. "All the things we’re missin'," she sang. "Aperitivi, love, and kissin'," sang the Wabbit. "Are waiting at the end of our ride," sang Snail. "Hah!" shouted Lapinette and she cracked her whip again. "Hah!" shouted the Wabbit and he cracked his whip too. "Hah!" shouted Snail, who having no whip to crack, flailed his antennae instead - and they laughed and laughed and laughed.
at April 26, 2012