1. The Wabbits and a Speedy Departure 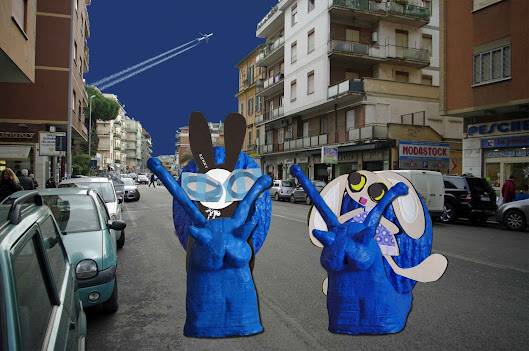 Following a communiqué from the Department, The Wabbit and Lapinette prepared to leave on an urgent mission. The Wabbit had decided that the most appropriate way to reach their destination was with the MoTo Snails and both he and Lapinette had made themselves comfortable on board.  "Are you sure Mo and To can reach a speed of Mach 2?" asked  Lapinette. "Oh, there have been modifications since then," said the Wabbit. "What kind of modifications?” sighed Lapinette suspiciously. "Super duper ones," said the Wabbit. "Won’t we fall off then?" said Lapinette. "Not at all," said the Wabbit. "Not since we introduced Advanced Fuzzy Traction." "We?" said Lapinette questioningly. "Big Blue Snail and I," said the Wabbit. "Hmm," said Lapinettte, and she shifted uneasily on her perch. "Anyway, I think you’re pulling my leg," she added. "Check it out!" yelled Mo. "We have carefully assessed the modifications and we’re quietly assured," said To. Lapinette leaned across to the Wabbit in a confidential fashion. "Wabbit," she whispered, "I can never remember who is Mo and who is To." "No problem," smiled  the Wabbit. "Mo is the impetuous one and To thinks too much." "I don’t think I think too much," said To, who had heard everything. "What about breathing at high speed?" said Lapinette. "Well since they’re so fast, you won’t even have to hold your breath," said the Wabbit. "We are about to commence scheduled departure on the count of three," said To. "Three," said Mo. And with two ear-splitting sonic booms, they vanished.
at April 02, 2012