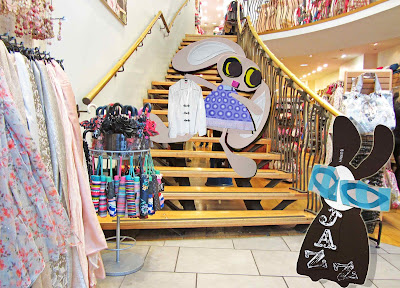 The Wabbit was waiting for Lapinette when she came hopping down the shop stairs. "Look what I found!" she cried. "Excellent!" said the Wabbit, automatically. "What have you been doing?" The Wabbit knew quite well what Lapinette had been doing, but he thought he'd better ask anyway. "I've been accessorising!" said Lapinette unexpectedly. The Wabbit could think of only two kinds of accessory. The first, you bolted onto other things and the second, you plugged in to something else. The Wabbit knew that in both cases, it gave the object concerned some extra functions. "Splendid," said the Wabbit. "That shirt looks a bit Tyrolean. Are you using it to strategise on the next mission?" "There's a new mission and I didn't hear?" said Lapinette with surprise.  "Well I think it's going to happen," said the Wabbit. "I was reading Carrot World and there are disturbing developments." Lapinette suddenly remembered that this was the Wabbit's year to perform the duties of Grand Daucus for the Carrot Club, so she didn't make any jokes. "Should I visit the armoury?" she asked hesitantly. "That would be wise," said the Wabbit. " Our far-flung outposts have suffered sabotage and wilful damage. Witnesses observed strange colourful creatures that looked like carrots." "Parrots?" said Lapinette. to make sure she'd heard properly. "Reports have to be verified," said the Wabbit, "but they're calling them Skarrots and you wouldn't want to run into them by accident!" Lapinette looked at the Wabbit with a questioning look. "They Meet and Eat," he said.
at April 17, 2012