3. The Wabbit & the Puppet Parliament 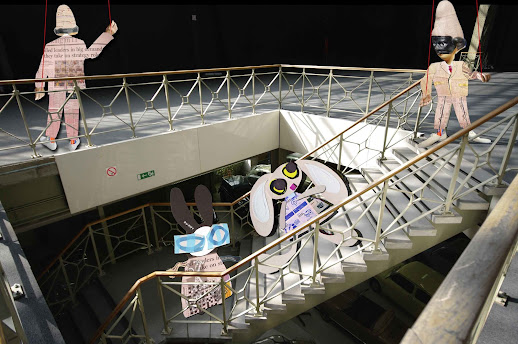 The Wabbit and Lovely Lapinette were speedily shown to the debating chamber of the Big Parliament and they scampered up the stairs to the sound of considerable moaning from the Wabbit. "I don’t like this costume," complained the Wabbit. "You’re meant to blend in - you’re undercover," whispered Lapinette. The Wabbit scowled. "When I’m undercover," he said ponderously, "I like to sell newspapers, not be a newspaper." Then the Wabbit thought for a bit and decided he hadn't quite exhausted the topic, so he continued. "Besides, I rustle too much and by the way, I’m creased," he grumbled. "I think it’s rather fitting you’re a crossword," said Lapinette. "Oh look, there’s our contact. Do you think he’s done what we asked?" "Well we gave him plenty of coins, I can hear him jingling," said the Wabbit, shifting his ears and thinking some more. "Lap, Are you certain the plan will work?" he whispered. "Of course," said Lapinette. "After the Big Vote, there will be complete confusion and a power vacuum will follow." "What then?" asked the Wabbit, thinking of a vacuum cleaner. "Just hop in and fill it," said Lapinette. The Wabbit brightened considerably as he imagined himself as a massive cyclonic separator. Lapinette kept quiet since knew that the Wabbit was given to flights of fancy and she was cute enough to humour him. "Please hop this way," said their puppet contact. The Wabbit raised his paws one by one as if they were pulled by strings. “Hoppy to oblige,” smiled the Wabbit.
at April 05, 2012