The Wabbit reads the newspapers 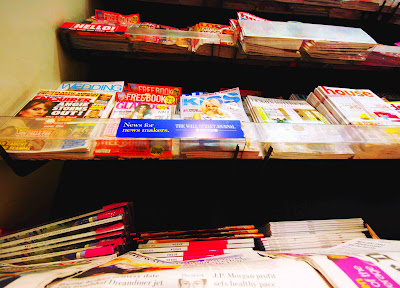 The Wabbit could hardly see the papers, because they had stacked them in an unfriendly way for wabbits. But he could see some stuff in the strange light. He had hoped there was news of what had happened to the shadow people from Castle Doom. But there was nothing but Bwangelina - and the Wabbit did not care about film stars. All he could see was Pet News and even that could annoy the Wabbit. No, there was nothing he could see of worth in the news. And even less in the newsagents. The Wabbit spent some time though, nosing up against the quality broadsheets (it was a far as he could go). It might make a nice bed he thought, if chewed well. He selected The Herald Twibune, the Washington Post - and the Guardian for fun because of the misprints and he stealthily stole from the shop since he had forgotten his money. It was late in the day and he left behind the tops of the front pages, because then the newsagent wouldn't lose any money. He had learned that from the shadow people. But later, when making a nice bed for himself, the Wabbit read some disturbing news ..... (to be continued).
at July 16, 2010