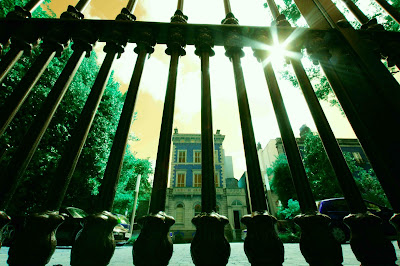 Castle Doom lay on one of the Wabbit's frequent walks. The Wabbit remembered well the old days when anyone could stay at Castle Doom - if they dared! For it was said in the village that if you stayed a night at Castle Doom, then you would never be the same again. For this reason, the Wabbit usually hopped quickly past. But one day rich people from the next village bought Castle Doom and threw out all the poor people who could afford no better and who had turned into shadows. Then the rich people made very big gates to keep out all the people who passed. But the Wabbit knew he could go in if he wanted. No gate could keep him out. He just didn't want to go in, because the big gates made him worried. He was glad he was a wabbit and not a shadow and he wondered what would become of the shadow people. Sometimes he thought he had caught sight of them in the small streets, but he could not be sure if it was weally them. He was sure they had made a home somewhere, but where? Somewhere on his travels, the Wabbit knew he would discover them.
at July 14, 2010