3. The Wabbit and the Troubled Priest 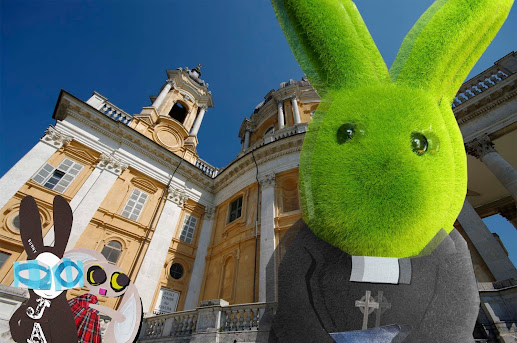 The Wabbit and Lapinette decided to track down the strange priest and get the inside story. So they made for the Superga Basilica to hear him say mass. Inside the church, they waited and waited at the back. The mass went on for some time, but there was no sign of the priest. So they hopped outside for a look around. And there he was, looking into the distance. The Wabbit and Lapinette could hear the mass continue from inside, relayed on tinny speakers - and they crept closer. The priest clutched his bible tight and chanted in a ghostly Latin. They listened carefully. "It's the Tridentine mass," whispered Lapinette. The Wabbit raised an eye. "It's the old form," added Lapinette. The Wabbit nodded, because Lapinette seemed to know all about that sort of thing. The priest waved his paws in a blessing and suddenly turned. But he didn't seem to see the Wabbit and Lapinette. He walked right at them - and then through the Wabbit as if he he wasn't there. The Wabbit shivered and his fur tingled, but he beckoned to Lapinette and together they followed as the priest walked towards the church. They could hear him mumbling prayers as he moved straight through closed doors. "Deus, Deus meus: Quare tristes es, anima mea, et quare conturbas me." "He's going to climb the stairway to the tower," said the Wabbit. Lapinette frowned. "Better go after him." They watched the priest mount the narrow spiral stairs and climb half way up. Then they saw him pause and turn. His face was blank as he looked down ....
[O God my God. Why are you so sad my soul, and why do you disquiet me?]
at August 08, 2019