1. The Wabbit and Lost Communications 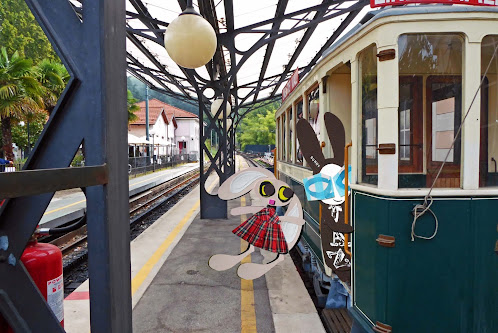 Lapinette caught up with the Wabbit at Sassi station. She knew it was the Wabbit long before she saw him, because he was making the sounds of a traction engine and hissing doors. "Hello Wabbit, where have you been?" The Wabbit turned and hung from the rail. "I haven't been anywhere!" Lapinette slid past the Wabbit and slipped on board. "I sent you many messages," she said in an annoyed voice. "I sent you messages also," said the Wabbit, "but reply came there none." He fiddled with the controls. The Sassi-Superga line was a rack railway - but technically this counted as tram line number 79, so the Wabbit thought he was in charge. "In fact," said the Wabbit, "I haven't had any notifications from anyone and it gave me lots of time to do other things." Lapinette laughed. "Like what?" The Wabbit grinned back. "Like develop screenplays." Lapinette stifled another laugh. "Tell me about them." The Wabbit swung back and forward on the rail. "I sketched out five different films and sent them to Hollywood." Lapinette waited patiently. "I was never notified," scowled the Wabbit. Lapinette had a thought. "Maybe our notifications are being stolen." The Wabbit jumped in the air. "That's it! I saw something on TV and it was just like one of my ideas." Lapinette waited once more. "It was the story of a ghostly duvet," explained the Wabbit, "It smothered and devoured anyone who slept under it." Lapinette grimaced. "So who stole your idea?" The Wabbit struck the rail with a paw. "The Dazed Duvet Syndicate used it as an advert ..."
at August 21, 2019