6. The Wabbit and the Soul of the Priest 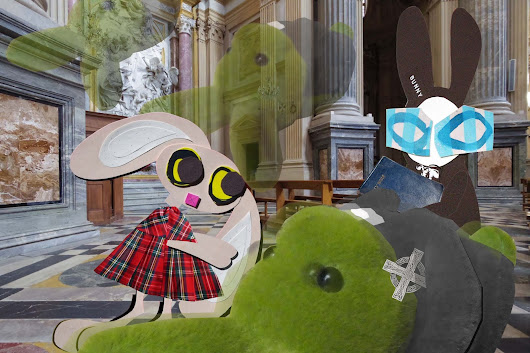 The Wabbit leaned over the stricken priest. "Better call an ambulance," he muttered. Lapinette shook her head. The priest stirred briefly. In one paw he clutched his cross and with the other he passed his bible to the Wabbit. "Thank you for helping me." His voice was feeble and the Wabbit leaned closer. The rabbit priest whispered to the Wabbit and then to Lapinette. "Only the good and just can see me." Now the Wabbit shook his head. "I don't understand." The priest's head slumped but he continued to whisper. "Decades have passed since I was pushed over the rails. I was trapped in a loop and doomed to repeat my fall. But you have freed me." Lapinette grasped at his paw but there was nothing to grip. The priest's body started to fade. "Goodbye father," said the Wabbit. "Goodbye father," repeated Lapinette. The Wabbit tried to return the bible to the paws of the priest but they were insubstantial now. "You keep it," said the priest. They were his last words. His body floated upwards and into the dome of the basilica - then it vanished. Lapinette and the Wabbit watched until they could see no more. But they were startled by a clergyman's booming voice. "I'm sorry, the church is closing now." "We were talking to the priest," said Lapinette. "What priest?" said the clergyman. He turned on his heel and disappeared into the sacristy. The Wabbit and Lapinette continued to look up at the dome for a while. The Wabbit tucked the bible into his fur. Then together, they walked out the doors and into the evening light.
at August 14, 2019