2. The Wabbit and the Fiery Bus 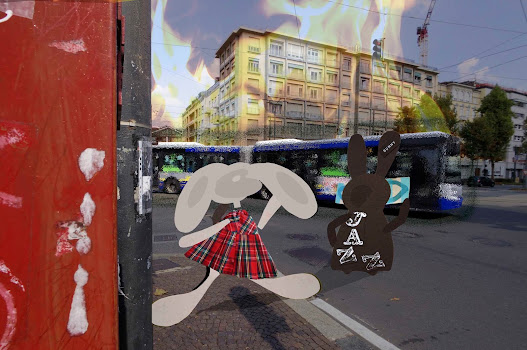 The Wabbit and Lapinette decided the bus home was the best option and they saw one coming. So they hopped quickly as it rounded the corner into the plaza. "We might just make it!" shouted the Wabbit. He waved to the driver. "Wait!" yelled Lapinette. The Wabbit stopped in his tracks. The bus burst into flames that engulfed the whole vehicle and licked at nearby buildings. "How did you know?" yelled the Wabbit. "I know everything," shrugged Lapinette. They ran to the bus to help but couldn't get close. The heat was intense and the noise deafening. Black carbon showered from the bus and coated the road in a slick, tarry substance. The Wabbit held up a paw. "It's not finished." The bus shimmered and warped. Then it made the groaning noise of tortured metal, disappeared and reappeared in an instant. The flames vanished. The bus bent back into shape. The heat dissipated and the bus engine burst into life. Passengers sat as if nothing had happened. The bus drew away to turn the corner and they watched it go. "You don't see that every day," murmured the Wabbit. "What's going on?" said Lapinette. "Public service cuts?" suggested the Wabbit. Lapinette nudged his leg. "Something's happening in this city." "And you don't know what it is?" grinned the Wabbit. Lapinette's smile was confident. "I will do..."
at November 09, 2018