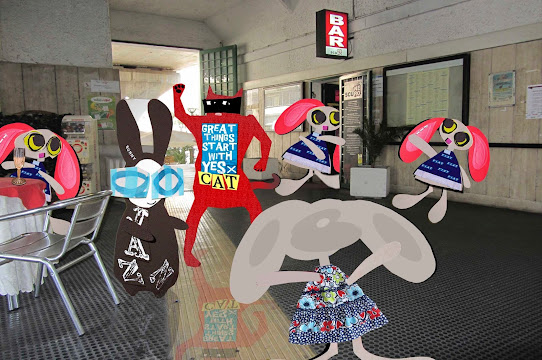 It was the nearest bar that looked open and they flocked. Skratch the Cat mysteriously arrived to join them and he raised his paw in his usual greeting. "How did you know we were here?" shouted Lapinette with glee. "I'm a feline," smiled Skratch; "I know everything." The Wabbit embraced Lapinette while addressing Skratch. "In that case, you can tell us what kind of adventure we just had." Skratch nodded gravely. "It was mostly bleak and dystopian. Yet it provided hope." Mitzy pushed at the bar door. "I hope this place is well stocked." The Wabbit drew back a chair for Lapinette. "It was a traumatic encounter with the forces of ennui." Skratch nodded. "The dystopian elements of the No society were more than a backdrop. There is tragedy - writ large." He shook his head. Fitzy grunted and rattled the stuck door. "It'll be a tragedy if I can't get drink." Tipsy had somehow acquired a glass of prosecco, which she drank too quickly. She hiccupped. "The No's created a negative spaysh and we hopped right shrew it." Skratch raised his paw again. "Tipsy is right. The Adventure may have been bleak. But once drawn out, the enemy allowed itself to be persuaded." "Aha," said Lapinette. "Our Yes was already implied in their No." "That's what Camus said," sighed the Wabbit; "So shall we break the door down?" "Yes," shouted Lapinette.
[The Wabbit refers to the essay by Camus Betwixt and Between ]
at May 12, 2017