10. The Wabbit and the Light of Day 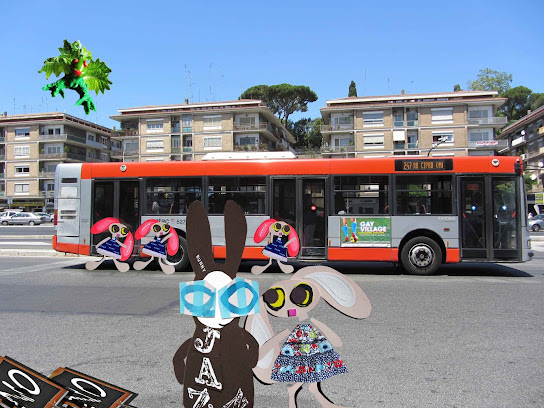 The day was fine and things were almost normal. Cars whizzed past. Buses throbbed at bus halts. The placards suffered the fate of most placards after a big event and lay dirty on the asphalt. "I'm glad that's all over," said Lapinette. She breathed a sigh of relief. So did the Wabbit. "I'd rather fight every monster in the Sombrero Galaxy than deal with negative ninnies." Lapinette slipped her paw into his and smiled. Her personal guard danced alongside a waiting bus and entered by the exit. "The Wabbit shook his head in amusement. "Good thing Wabsworth's not here. He'd smoke 'em." Lapinette grinned. "He'd have to get past me first." "Then I don't fancy his chances," nodded the Wabbit. A sudden flapping of cabbage wings and breathing of fire heralded the arrival of Terni the Food Dragon. "Wabbit! Well done." The Wabbit looked up. "We didn't do so much." "Negativity brings its own reward," said Lapinette. Terni circled three times and dropped down for a landing. "Caffès are open!" yelled Tipsy; "Let's stock up." "Fruit's follicles," said Fitzy; "It's aperitivi time." Doors hissed on the bus. The Wabbit looked up. "Terni, can we hitch a lift?" Terni shook with laughter and breathed a jet of flame. "All aboard for the magical mystery tour!" "Just take us for a drink," said Lapinette - and they laughed and laughed and laughed.
[smoke: military jargon.  To punish with excessive physical work due to a minor infraction.]
at May 10, 2017