8. The Wabbit and the Attack of No 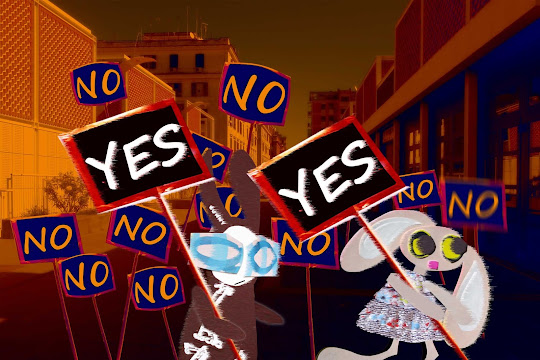 Lapinette glared at the placard, then took out a crayon and wrote Yes. The Wabbit grabbed one too, and did the same. At that moment everything changed. The sky became red and bathed the streets in a post nuclear glow. There were more Nos than you could shake a stick at and flight seemed advisable. Lapinette and the Wabbit took to their heels and ran, but the Nos vaulted along the street like pole jumpers. "Yes, yes yes," shouted the Wabbit and he gripped his placard tight. "No to the Nos!" shouted Lapinette. The No placards shouted too. "All hail the dawn of No!" The Wabbit hopped faster. "I don't like the sound of them." Lapinette swerved to the left. "Maybe we can change them!" The high pitched howls of the Nos shattered glass all around. The Wabbit shook his head. "No way." Lapinette puffed and panted but disagreed. "We can backwards map them." The Wabbit kicked a No placard backwards. It snapped and it fell to the ground. "Just like that," smirked the Wabbit. Lapinette didn't agree but a placard hit her on the head. She lashed out. "Take that, you negative ninny!" It flew straight through a shop window and lay in a crumpled heap. The No placards fell back. "They don't like it up 'em," laughed the Wabbit. Lapinette grinned. "Let's get ahead and we'll cut them off at the pass." "Then bushwhack them?" shouted the Wabbit. Lapinette rubbed her head. "I was thinking bulldoze."
at May 03, 2017