8. The Wabbit at the Phantom's Opera 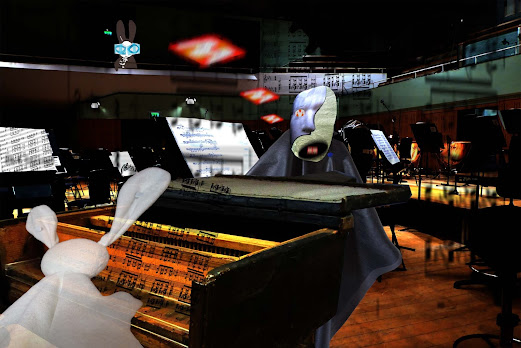 The Wabbit managed to locate a piano of sorts, and he trundled it onto the stage. "Try it," he said and he played a few notes. Ghost Bunny floated her paws across the keys, producing a melodious yet ghostly sound that made the Phantom smile. The Wabbit retired to the balcony and applauded lightly. Ghost Bunny began to sing in an eerie tone that made the Wabbit's fur stand on end. "Those who have seen your face, retreat in fear," "And my mask makes matters worse, I hear." responded the Phantom. "It doesn't matter!" sang Ghost Bunny. She gently caressed the keys. Notes floated to the roof and back down to the stage where they swam like fish. The Wabbit stage-whispered from the balcony. "Beware, the Phantom of the Metro." The Phantom turned. "You have come here, because I am alone." Ghost Bunny sang sweetly. "We're not going to leave you, all on your own." "But it's all I have known!" sang the Phantom. Ghost Bunny moved two chords up, then crashed down with all the drama she could muster. Music shimmered and died. "Silence," she said quietly. "Save me from the silence," sang the Phantom. The Wabbit shouted from the balcony. "Your music is in the silence between the notes." Ghost Bunny played a piece by Debussy. "That's jazz," she breathed. "But what's that beat?" called the Wabbit. "My heart," exclaimed the Phantom.
[Ghost Bunny plays Chou Chou, a piece by Debussy written for his daughter. Derived from Cakewalk, a precursor to jazz.]
at May 31, 2017