8. Skratch and the Guided Landing 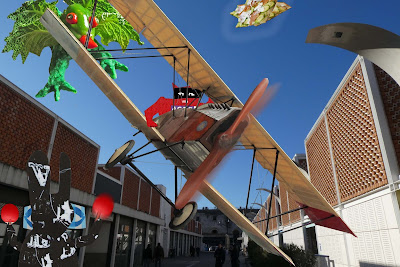 The Wabbit said follow the Pizza Star. Susan and Skratch did exactly that. They followed through the night and early in the morning found themselves above Testaccio Market. Terni the Dragon circled. It was his territory and he'd kept it clear of alien pizza. Wabsworth emerged from the market and waved his batons. "Steady now," he yelled. "Slow down and stop," he signalled. Susan screeched to a halt. Shoppers paid little attention. One of them said, "Take no notice, it's only Skratch the Cat in a biplane." Terni landed to the rear. Skratch jumped out. "What's with the Pizza Star?" Wabsworth tucked his batons into his fur. "It's not a star, it's an automated space beacon." Skratch looked up. "Is it armed?" "Oh yes," said Wabsworth, "Lasers." The Pizza Star spun in the sky and made off. Terni belched a stream of flame. "The alien pizzas are gathering off the coast. They're planning something. The Wabbit said to meet at the old bunker." Wabsworth and Skratch jumped into the biplane. Susan taxied and took off steeply. Terni swooped in and took the lead. "Susan. Follow that dragon," said Wabsworth. They streaked across the sky. The Pizza Star sparkled and whirled. Terni set the sky on fire. Susan looped the loop. "Do you think they'll know we're coming?" said Skratch.
at December 30, 2019