6. Terni and the Curious Smell of Pizza 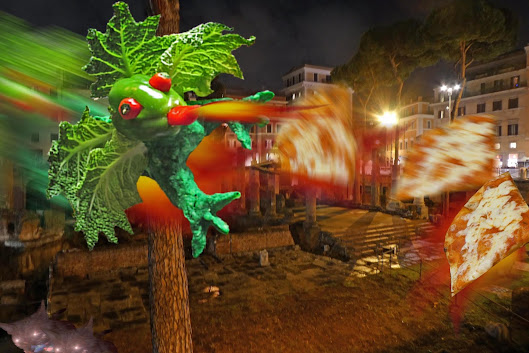 Terni the Food Dragon was in charge of Rome air space and he monitored continuously. So when he smelled an over-abundance of the intoxicating oudor of pizza, he wheeled in the sky, peeled and plunged. Alien pizzas were trying to take over Largo Argentina and they whirled like hot, demented helicopters. Mozzarella dripped, olives flew like bullets. The square's resident cats screeched and scattered in all directions. Terni had the alien pizzas in his sights but they moved fast. He belched flame and winged one. There was some smoke. The smell of cooked pizza covered the area. Terni soared into the air then turned and plunged down again but the pizzas were fast as mosquitoes. Terni was a food dragon so he doused them in burning oil. The pizzas fried crisp but somehow they kept gyrating. Then they made sounds like a thousand car alarms - in a unified piercing shriek that bent the trees. Even Terni winced but he was determined. He charged his flames to super oven bake and threw everything he had. One by one the pizzas burst into flames. Olive stones whizzed past, hot as fiery coals. Strips of Mozzarella lay blackened on the grass. Tomato pulp hit the trees and dripped bubbling down the bark. Charred toast clung to branches. Terni hovered as cats returned to lick the mozzarella. "The Commander better hurry," he thought, "I deep fried the alien pizzas for now but things are getting a little too hot around here..." He sent a mental message though the ether. "Bring spatulas!"
at December 23, 2019