2. The Wabbit and the Eyes of the Tiger 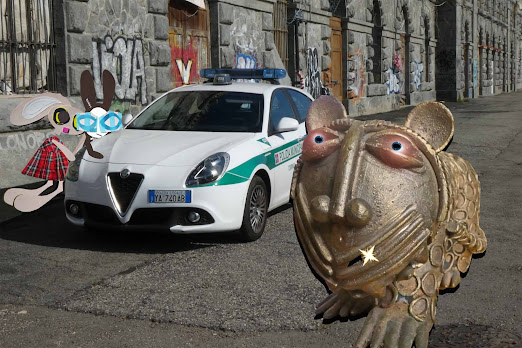 The Wabbit and Lapinette followed the roaring sounds. The streets were deserted and it was easy to trace the hubbub to the river. Now another noise joined the roaring. A siren shrilled continuously and Lapinette covered her ears. They rounded the corner. The Wabbit stuck his paw through the open window of an abandoned police car and turned the siren off. "Phew," said Lapinette. Her ears quivered. But now they could hear roaring again. "Looks like we've tracked the monster," said the Wabbit. Along the river embankment strolled a strange tiger. It had a nonchalant gait and seemed to be grinning. Every time its giant feet hit the road, it let out a mighty roar and its eyes flashed. "I know of that tiger," breathed the Wabbit. "Did it come to tea maybe?" quipped Lapinette. The Wabbit shook his head. "No, it arrived here with Puma." The tiger strolled past the police car. The Wabbit whispered in Lapinette's ear. "Who went in the tiger's den and came out alive?" Lapinette shook her head. "The tiger," replied the Wabbit. The tiger turned. "That's not funny. Are you my prey, rabbits?" The Wabbit tapped the hood of the car and laughed. "You got the wrong rabbits." Lapinette pointed along the embankment. "The rabbits you seek are elsewhere." The tiger smiled a rueful smile. "Well, they don't look like you." "Spiky ears and of ghastly visage?" asked Lapinette. The tiger nodded. The Wabbit hopped forward. "What did they do to you?" "Nothing," said the tiger, "they just get on my nerves."
at December 04, 2019