The Wabbit watches a Mechanic 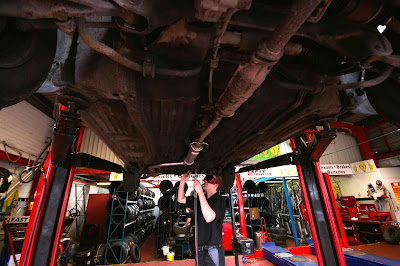 The Wabbit did not travel by car very often. But when he did, he took care to look all around. He was acclimatised to cars in stwict correspondence with the Wabbit Council Code of Practice. But he did not expect the car to go up in the air, because the Wabbit knew that is not the way of automobiles. And so he hopped down and saw the most exciting thing. A man had a stick with a light coming out of it and he was doing something to a long pipe. The Wabbit heard them talking about a hole. Now he was familiar with holes - they were a place in the ground, but he could see there was no room for a wabbit. It was some other kind of hole, not a dug hole. After an hour the man put the car down and the Wabbit hopped in the back seat. Phew, thought the Wabbit! It would have been a long way home with no car.
at August 16, 2010