The Wabbit is forced to deal with Change 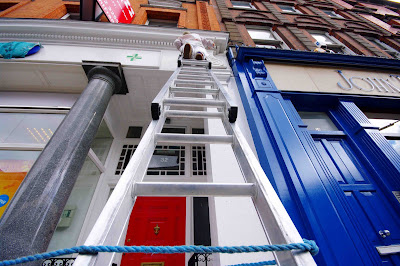 The Wabbit looked up but felt a bit dizzy. He did not like it when things changed because a wabbit needs some certainty about where things are. Otherwise a lot of bumping into things happens. They seemed to be painting a shop he knew well and he hoped they were not changing the colour. The wabbit sidled up to the ladder thing (yes, wabbits are entirely capable of sidling if they want to). No one ever saw the Wabbit because they never expected to see a wabbit. And the man on the ladder certainly never saw him, even though the Wabbit stared for some time at his feet. The Wabbit felt happy to be back in the city and to see all the things there. Even though the country was supposed to be his natural home. The Wabbit, being a philosophical wabbit, scoffed at that idea! He knew he was an authentic wabbit and wabbits go where they like.
at August 05, 2010